A History of the Best Construction Hard Hat

Hard hats are essential pieces of personal protective equipment, also known as PPE. They’re so essential, in fact, that OSHA requires employees to wear them whenever they’re on a jobsite. Hard hats protect against falling debris, flying objects, collisions, electrical shocks, and more. The best construction hard hat can save lives and prevent injuries on the job.

A History of Construction Hard Hats

The history of hard hats is a fascinating one. Also known as construction safety helmets, modern hard hats are updated versions of ancient battle helmets that have been in use for close to 4,000 years. One of the earliest helmets was unearthed near the ancient Greek city of Mycenae.
With the advent of the Industrial Revolution, it became necessary to protect the head on the job. The first construction safety helmets were developed by workers, not employers. Dock workers, who often got injured from objects falling off ships, were among the first to create their own helmets. They did this by smearing their soft hats with tar and letting them dry in the sun. These homemade helmets offered protection against some — but not all — head injuries.

From there, homemade helmets began spreading to other industries. This led to the introduction of the first construction hard hat in 1919. This hard hat was developed by Bullard, a small company that supplied equipment to mining companies in the western U.S. Using his doughboy helmet from World War I as a model, Edward Dickinson Bullard designed a protective helmet for miners. Soon after, the U.S. Navy commissioned Bullard to design and build a safety helmet for shipyard workers.

In the 1930s, two massive construction projects — the Golden Gate Bridge and Hoover Dam — brought mainstream attention to safety helmets. Both projects involved large numbers of workers who were required to complete tasks in dangerous environments. The lead engineer for the Golden Gate Bridge asked Bullard to adapt his miner hat to protect bridge workers against head injuries. Bullard complied, and the bridge project became the first construction hard hat area. Bullard also created a special hard hat for workers who blasted sand. This hard hat simultaneously covered the face and allowed workers to see through a window. It also provided air from a compressor to help workers breathe.

As time passed, manufacturers began using new materials to make hard hats stronger and easier to wear. In the late 1930s, construction hard hats were introduced that were made with aluminum and plastic. These hard hats were both lightweight and strong. Meanwhile, aluminum hard hats were not allowed to be used for jobs involving electricity. The “shock guard” helmet was invented to protect workers against electric shocks up to 10,000 volts.

Fiberglass hard hats were common during the 1940s. In the 1950s, thermoplastic became the leading hard hat material. Thermoplastic was easy to mold and shape using heat, and it was inexpensive to produce thermoplastic hard hats. The first polycarbonate hard hat was unveiled in 1961. These days, most hard hats are made from high-density polyethylene or advanced engineering resins.

Depending on the job, modern hard hats can have different features. These include:

Some types of hard hats have a rolled edge that drains rainwater off the front of the hat as well. The rolled edge prevents water from rolling down the back of the worker’s neck.

There are two main types of hard hats: full brim and cap varieties.

OSHA began issuing hard hat guidelines during the 1970s. In general, workers are required to wear protective headgear in any work environment where burns, electrical injuries, falling or flying objects, and irregular or moving surfaces could cause an injury. However, specific guidelines vary based on the industry. OSHA doesn’t require all workers to wear types of hard hats, either.

Hard hats are designed to resist penetration and absorb the shock of a blow. To achieve these goals, the best construction hard hats are made with two parts: the shell and the suspension. Both parts must be in good working condition to properly protect the head. The shell must be hard enough to resist an impact. Comparatively, the suspension uses a shock-absorbing headband liner and crown strap to keep the shell away from a worker’s head.

Still confused about the best construction hard hat for your job? These FAQs can help clarify your options:
Which Is Better: A Full Brim or Cap Hard Hat?
Both full brim and cap hard hats help workers avoid head injuries due to falling objects at jobsites. They can be used by workers who perform various tasks, such as:

For those who are deciding between a full brim or cap hard hat, it may be beneficial to try both. That way, workers can determine which type of hard hat enables them to safely and comfortably perform a wide range of tasks and protect their head against falling objects.

Can You Wear a Hard Hat Backward?

Workers in tight spaces may need to wear their hard hat backward, so they can effectively protect their head. The best construction hard hat is designed to protect a worker’s head against falling objects, regardless of how the hat is worn. As long as a hard hat enables a worker to complete myriad tasks safely, the hat can be worn forward or backward.

Can You Drill Holes in a Hard Hat?

Workers should never drill holes in a hard hat for ventilation, add attachments to the hat, or alter or modify the hat in any way. Any changes to a hard hat can weaken its shell and allow electrical current to pass through it.

What Do the Different Hard Hat Colors Signify? 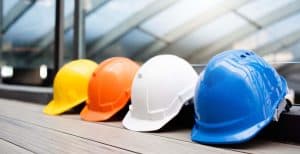 Brown: These workers perform welding or other high-heat jobs.

Grey: Reserved for visitors to the job site.

Pink: Popular with women workers; often issued to males who forget to bring their hard hats to work.

Of course, those who work at a construction site may see hard hats in an assortment of colors. Along with wearing hard hats, construction workers must also account for ways to ensure their work zones are safe.

Do I Really Need to Wear a Hard Hat at Work?

When in doubt, the answer to this question is always yes. You’ll never regret having worn a hard construction hard hat, but you may indeed regret not wearing one. If you operate an aerial lift, you’re legally required to wear one. It’s one of the most important aspects of aerial lift safety. Training and certification are equally as important – don’t neglect any of these safety recommendations, as they could save your life.

Construction workers face unique challenges and workplace hazards each day. While the best construction hard hats can protect against some injuries, it’s important to take a proactive approach to avoid accidents altogether. Fail to give safety measures the respect they deserve, and you may find yourself in over your head. Workplace safety training helps workers develop safe habits on the job. Keep these tips in mind the next time you head to a jobsite:

These safety tips are really just the beginning. To really make safety a priority in your organization, be sure to provide regular safety training opportunities. Training can ensure that workers are up to date on the latest safety techniques and best practices. They also enable your business to comply with OSHA regulations and ensure workers know which PPE is required for the task at hand.

Get Aerial Lift Training from CertifyMeOnline.net

While construction hard hats are indeed important, they are really only one aspect of workplace safety. In fact, your organization should have a thorough safety plan in place to ensure workers are educated and trained on industry best practices. This isn’t just recommended – it’s actually required by OSHA. If you’re unsure of how to best train your employees to OSHA standards, CertifyMeOnline.net can help. Our extensive training programs teach workers how to use aerial lifts, which PPE they’ll need, and how to avoid many of the most common workplace accidents. For more information about our offerings, or to sign up for our classes, reach out online or gives us a call at (602) 277-0615.