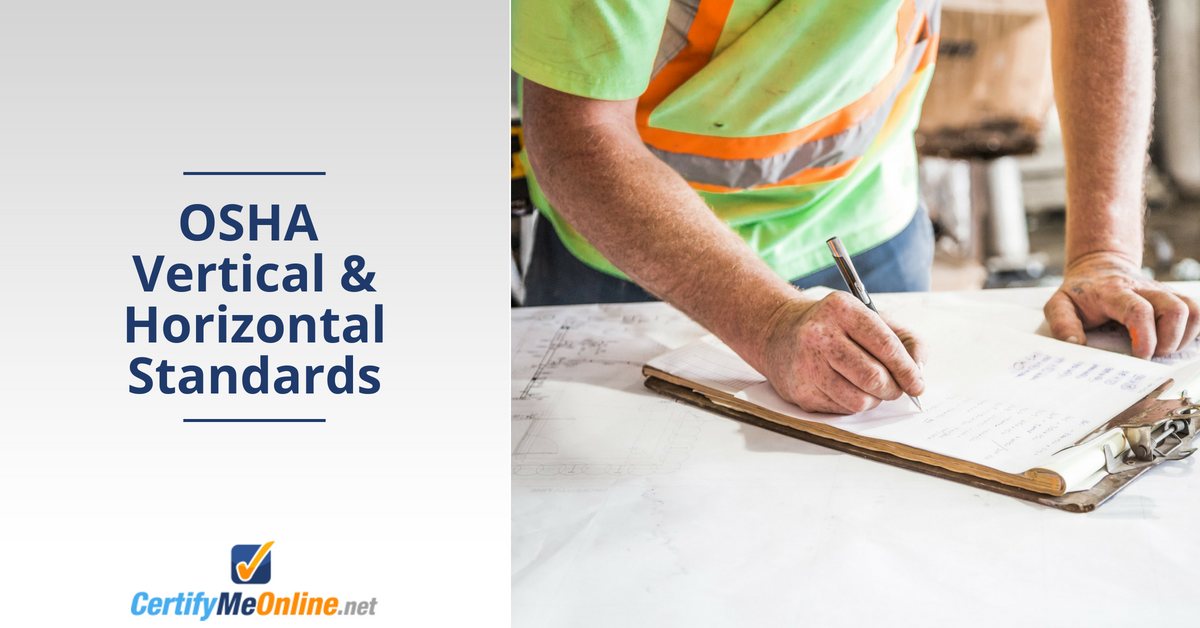 OSHA (Occupational Safety and Health Administration) is an agency of the U.S. Department of Labor. OSHA was created by Congress in 1970 and sets and enforce rules and regulations that protect workers against unsafe or unhealthy working conditions.

OSHA requires all employers to keep their places of work free from known hazards that could cause injury or death to their employees. Regulations set by OSHA are known as standards.

Most OSHA standards come from one of three sources. These are National Consensus Standards, Proprietary Standards, and Pre-existing Federal Laws. Here’s a bit of background on each of the three:

Horizontal standards cover a wide range of potential workplace hazards. Fire protection, floor and workstation surfaces, and first aid are some of the topics covered. An example of a horizontal standard is the Hazard Communication Standard (HCS). The purpose of HCS is to ensure that all employers and employees can recognize and are aware of the potential dangers of chemical substances you can find in the workplace. HCS also talks about the precautions workers can take to avoid contact with dangerous chemicals and other substances.

OSHA also has horizontal standards in place that go over the operation of aerial lifts workers use for doing overhead tasks. OSHA defines an aerial lift as any vehicle-mounted device that lifts personnel. These include:

Interestingly, OSHA doesn’t consider scissor lifts to be a type of aerial lift. They’re classified as scaffolds, and are covered under separate horizontal standards.

OSHA’s rules are intended to help reduce the number of accidents related to aerial lifts that result in serious injuries and deaths. Here are a few of them:

OSHA horizontal standards require all aerial lift operators to be properly trained and certified. The training and certification of workers is the responsibility of the employer. Not complying can result in large fines. Serious breaches can also include prison time. The fastest, most convenient and best way to avoid OSHA violations is to certify operators through CertifyMeOnline.net’s online OSHA-approved training program.

For a complete list of special industries that fall under OSHA vertical standards, check Subpart R of Code of Federal Regulations (CFR) 1910. Most, if not all, of these industries involve the use of aerial lifts in everyday operations. This makes them subject to OSHA vertical safety standards. When there’s a vertical standard that applies to a certain industry, the vertical standard takes priority over horizontal standards. As with industries covered by horizontal standards, it’s the responsibility of the employer to see that all operators are properly trained and certified. In addition to aerial lift operator training, CertifyMeOnline.net also offers OSHA approved online Aerial Lift Safety Training courses.

Our training courses are designed to comply with OSHA vertical standards and horizontal standards. They make an ideal foundation of skills and knowledge for beginner aerial lift operators, veteran scissor lift workers, and everyone in between!

CertifyMeOnline.net is the leading online aerial lift training specialist. Since 1999, we’ve trained thousands of clients. CMO also provides safety training online. Our courses are fast, convenient and affordable. Training can be completed in as little as an hour. All materials are available online 24/7, so courses can be taken using a smartphone, tablet or similar device anywhere there’s an Internet connection available. To learn more about OSHA-approved Training, speak with one of our safety experts at 888-699-4800 or contact us online today!

How to Prepare for an OSHA Inspection

Are you prepared to handan on OSHA inspection? What are the main parts that make up an OSHA inspection? And what about fines and penalties? You have questions, and we have answers! An OSHA inspection can be stressful for any company, especially if you don’t know what to expect going in. The OSHA compliance and training experts know what to expect. We’ve been involved with audits and inspections, and we also know how to help your company prepare accordingly. These inspections can relate to OSHA vertical standards (industry-specific regulations) and horizontal standards (more broad-based safety guidelines). Regardless of your company’s work activity, it helps to know how to prepare for an OSHA investigation. Get up to speed with OSHA vertical standards and inspections with today – check out our informative post!

Your aerial lift tasks probably differ from other users, but did you know that aerial lifts are literally used for hundreds of different reasons on a daily basis? We look at ten different industries and jobs that make good use of aerial lifts every day, and some might surprise you! Some of the industries are subject to OSHA vertical standards, since the type of work is so specialized, while others are more general. Did you know that college football teams use them to improve safety and security? Or that aerial lifts are used by amusement parks to maintain and repair rollercoasters (now there’s an OSHA vertical standard with a certain fun factor)? Check out this informative blog post today, and learn about all the cool uses for aerial lifts!