What is a Knuckle Boom Lift? 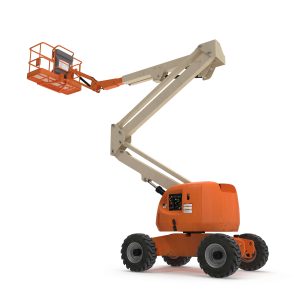 There are about five types of aerial work platforms (AWPs) and mobile elevating work platforms (MEWPs), and each has its advantages and disadvantages. The knuckle boom lift, also known as the articulating man lift, is one of the most popular types of AWPs, and it offers immense flexibility and versatility.

Does your company use knuckle boom man lifts and articulating boom lifts? If so, CertifyMeOnline.net has OSHA approved training and certification for every operator. Employers are responsible for providing the training required to operate equipment like articulating man lifts. If you’re not sure where to start with OSHA regulations & requirements – and many companies aren’t – we’ll take care of your training needs.

Register your company with CMO and make sure you’re OSHA compliant…you can’t afford the cost of non-compliance, and your knuckle boom lift operators deserve a safe work environment.

What Is a Knuckle Boom Lift? Here’s a Closer Look

What is a knuckle boom lift, anyway? They’re sometimes called an “articulating boom lift,” is often used in tight workspaces. This is due to the fact that the lift gives workers the ability to lift themselves or various items up, over, and out with unprecedented precision.

Once in the air, a knuckle boom crane can extend and bend. It has a work platform rather than a bucket, which gives workers extra room to perform their job tasks. The lift also comes with a turntable at the base that allows the boom to swivel. This allows the operator to shift the platform to different areas of a worksite. As a result of these features, the knuckle boom lift can be used in many different types of jobs.

Thanks to its convenient accessibility, high degree of maneuverability and versatile performance characteristics, articulating man lifts are popular in all sorts of industries and job sites. Let’s take a look at where you’ll find knuckle boom man lifts and articulating boom lifts.

What Types of Jobs Is a Knuckle Boom Lift Used for?

Knuckle boom lifts are commonly used by businesses in the oil, forestry, and construction industries. They usually fit through standard doorways and are easy to maneuver around hazards. Plus, knuckle lifts make it simple to access overhead work from aisles or other congested work areas.

With the ability to reach over and around obstacles, knuckle boom man lifts can be positioned right in front of the hard-to-reach work area. They’re ideal for construction projects, but those performing maintenance and cleaning work also find them useful. Boom knuckle lifts can be essential tools for those who install electric wiring or do piping work. Because they provide a safer alternative to ladders and scaffolding, these powerful machines are essential for lifting workers through doorways and in tight spaces. Because they’re quiet, knuckle boom lifts work well in shopping centers, airports, and other places where loud noises are an issue. They don’t emit any harmful fumes, so they’re really the ideal addition to any jobsite.

What Is the Difference Between an Aerial Lift and a Knuckle Lift?

Unlike other aerial lifts, a knuckle boom lift can be maneuvered horizontally and vertically and rotated 360°. As such, a knuckle lift offers greater maneuverability in contrast to other types of lifts.

While the maneuverability of a knuckle boom lift makes it a top choice in work areas where space is limited, the lift tends to offer a lower weight capacity than telescoping boom lifts. So, to determine if a knuckle lift is the right choice, you should evaluate all of the lift options at your disposal. This allows you to weigh the advantages and disadvantages of different types of lifts and find the right one based on your work requirements.

How Do You Operate a Knuckle Boom Lift?

If you want to learn how to operate a knuckle boom man lift, you need to enroll in a safety training program. This allows you to learn about a knuckle lift’s controls and how to maneuver the lift on different types of terrain. It also enables you to gain insights into knuckle lift operation hazards and how to avoid lift accidents and injuries.

Common reasons for using a knuckle boom lift include:

Knuckle boom cranes can also be used to move heavyweights from one location to another, which is one of the reasons why they are commonly used in industrial and construction zones. Due to a knuckle truck’s superior lifting capacity, many companies rely on this lifting machine. The ability to move weight can also improve warehouse management and help workers complete tough lifting tasks on time.

Despite being smaller and lighter than most weight-moving machines, knuckle boom lifts provide great payload space than other types of lifts. The small base doesn’t take up a lot of space but offers ample room to load and carry materials. A knuckle lift can sometimes do jobs that would often take two or three machines, too.

Thanks to their design, knuckle boom cranes offer superb control as well. They are easy to operate and highly maneuverable, even in tight spaces. Plus, they can easily switch from one task to another.

How Much Does a Knuckle Boom Lift Cost?

The cost of a knuckle boom lift ranges from $25,000 to $200,000, depending on the size of the lift, the manufacturer, the lift’s features, and other factors. You may also be able to rent a knuckle boom crane, with daily, hourly, or monthly rental options available. Check out CMO’s article on the pros and cons of buying and renting an aerial lift.

Which Job Sites are Ideal for an Articulating Man Lift?

Knuckle boom lifts are incredibly versatile, but they’re not intended for every type of job site. If you’re torn about whether or not to use this equipment on your next job, consider whether it can handle the loads workers will be hauling. Overloading a boom lift is a recipe for disaster, so it pays to calculate this before starting. It’s also worth weighing whether the lift can provide enough working height. If operators need to reach especially challenging places, your boom lift must be able to rise to the challenge.

Knuckle boom lifts are excellent investments, but only if you fully understand their limitations. Workers cannot safely or successfully use such equipment without proper training. Be sure to factor comprehensive safety training into the equation – without it, workers may find themselves in over their heads. Thankfully, CMO offers convenient training that allows workers to gain 100 percent OSHA certification in about an hour’s time.

Employers are legally required to provide training for boom lift operators. OSHA mandates this – fail to provide training and certification for safe handling, and your organization may face steep fines and penalties. Every operator must be trained on the model of lift they use at work. CertifyMeOnline.net can teach workers the skills necessary to safely and effectively use a knuckle lift.

In training, workers will master how to handle the many capabilities of the knuckle boom lift. They’ll walk away knowing how to inspect the equipment before each shift, as well as how to recognize and avoid hazards that lead to accidents. Participants will learn how to assess the work site for potential hazards, too. Convenient, affordable, and easy, our online training classes comply with all the OSHA guidelines and requirements.

Given how important it is that knuckle boom lift operators be properly trained, there’s no time to waste in signing up. Or convenient online training can empower your employees to use this equipment as safely and effectively as possible. Get OSHA compliant in as little as one hour’s time.

Ready to get started? Click here to register. If you have additional questions about our program, feel free to reach out online or give us a call at (602) 277-0615.

Types of Boom Lifts and What They Do

Aerial Lift Hazards and What to Watch Out For